Races
- Imperial
Any other, but Imperial have the best prerequisites

:
You have a variety of options to deal with enemies. The main way of attacking should be bashing an enemy with the Spellbreaker and hitting it with the Silver Sword. In case you are severely damaged use healing spells. When surrounded by multiple enemies, take some steps back and use your helmet's steam breath lesser power.

If you are facing hordes of undead or just single difficult ones, switch to Dawnbreaker and get rid of the small enemies to cause the explosion. If your magicka allows, consider casting undead damaging spells.


If you face enemies who try to fight unfair combat from afar like mages or archers, return their unfair combat with some good old dwarven bolts from your crossbow but never initiate ranged combat. You are a Paladin after all and honour the order's combat codex.

You are in general an honourable person and you never steal, commit murder or take orders which would require you to hurt the innocent. Rather you are a good person helping others. You always donate at temples and to beggars whenever you see one. You pray to Stendarr and to Mara and you always know, that the Lord is guarding you. You don't hire people in your services as followers because you don't want anyone get hurt. Instead you rely on the steadfast dwarven sphere found in the ruins of Kagrumez.

Iustus grew up in the Imperial city. He had a very good childhood with his parents working as prosperous merchants. They went to the temple on Sundays so they could pray to Mara and thank her for their good life.
One day, they were on their way to the temple, Iustus realised a man in black robes passing them. He was clearly in the temple before. For some reason he felt nervous. Why was he feeling nervous? They entered the temple and began their prayers. Iustus' nervosity didn't fade, it even grew stronger. But he didn't want to interrupt his parents' prayers so he kept to himself. Suddenly, he heard whispers. He looked up and turned his head around to look for the source of them. His parents were still kneeling in front of the altar and praying. In the entrance of the temple he saw a man in black robes, arms raised above his head standing firmly. What came next he will never forget. A corpse entered the room from the crypts. He was glowing blue and looking with cold dead eyes at him and his parents. Iustus let go of a loud shout of disgust. He recognised the Necklace of his dead grandfather around the corpse's neck. His parents shot up, but by the time, the undead was already over them and started beating them. Iustus started stabbing and slashing his wooden practice sword against the corpse, but nothing seemed to stop it. Then suddenly it crumbled to dust. Out of breath, he sank to the ground. Looking around he saw his parents, covered in blood with a lot of open wounds, not moving at all. He started talking to them, shaking them but he already knew, his parents were gone. They were gone to a place where he couldn't follow.
After their funeral the priestess of Mara approached him to give him her deepest condolences. He asked her what he was supposed to do now. So she gave him a job in the temple. Iustus spent several years serving as an altar boy and later as a priest. But he never forgot what this man in the black robes did to him. He often spoke to the now retired priestess about his feeling, his thirst for revenge. She could understand him but always tried to convince him to stay peaceful. After one of these talks went to a tavern and had a few drinks to ease his unrest. That night, he had a dream. He was standing in golden armour, a silver sword in his hands with his foot resting on the chest of a corpse. In his other hand there was a shining bright light.
He confessed his intake of alcohol and discussed his dream with the former priestess and she looked up at him and said: "Iustus, you have been chosen. I am sorry that I kept you from fulfilling your destiny. You are chosen to be a tool of Stendarr and Mara." Iustus was completely confused. He expected to be shunned for drinking and to hear the old tale of staying peaceful. But instead he was encouraged, encouraged to go cleansing the land of the undead for he knew what she meant. He was chosen to be a Paladin. After spending his earned money on his equipment, he started his work, going from town to town, from village to village, to caves and crypts and he always came back as a nobler man, a man who served justice. He never had to fight before in his life but with the guidance of Mara and Stendarr, he easily learnt.
One day he picked up a rumour in a tavern about a growing evil in Skyrim. He knew that it was his destiny to go and find out about it. On the border to Skyrim however he was caught by the Imperials who laid an ambush for the Stormcloaks. He was brought for execution but Mara and Stendarr wouldn't have him dead yet. A dragon attacked Helgen and led to a chain of events which set him free. He followed Hadvar down to Riverwood and then set out to reaquire his equipment.
He was just looking for a smithy when an Orc walked up to him, introduced himself as Durak and asked whether he would like to join a group called the Dawnguard to kill some vampires. He immediately agreed. He helped the Dawnguard to fight the evil vampires and proceeded to give his best to bring justice and help to those in need. 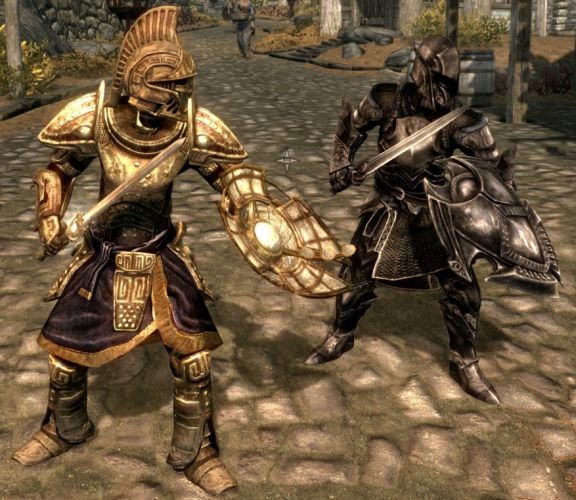 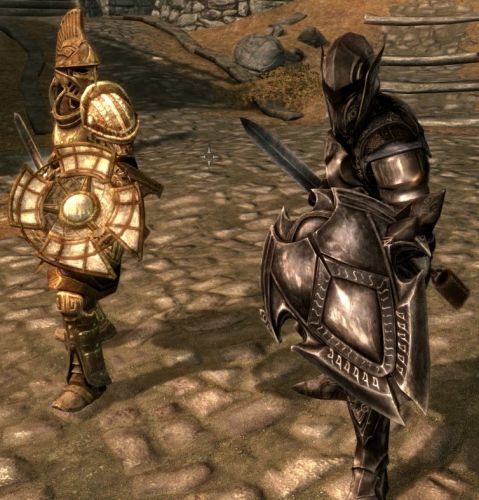