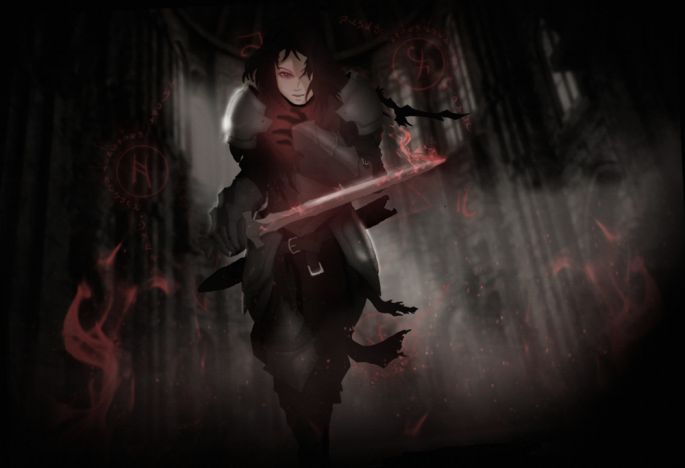 Combining the might of the blade and the power of the arcane, a Hex Blade is a vicious force to be reckoned with. While certainly capable of fighting toe to toe, Hex Blades rely instead on their knowledge of long forgotten dark magicks to afflict their enemies with terrible curses, rendering their enemies weak, helpless, and inept

In many ways, the Hexblade is the antithesis of the Paladin. Whereas Paladins seek to aid and defend in service to benevolent gods, Hex Blades invoke chaos and ruin much to the amusement of malevolent daedric lords, to whom they have sacrificed much in exchange for the immense power they wield.

A Hex Blade is essentially a spell sword, and like most spell swords they?re skilled fighters as well as adept spell casters. But whereas spell swords use magic to augment their own capabilities, Hex blades instead use a variety of evil spells to cripple the capabilities of their enemies. The mechanics and concept of cursing enemies plays a heavy role in this build. In most fantasy settings where they can be found, hex blades afflict their enemies with terrible curses that leave them fighting at a mere fraction of their former strength..

In Skyrim this translates to afflicting enemies with a wide array of status ailments, via magic, that severely hamper their ability to fight effectively. Everything from slowed movement, staggering, weakness to magic, crippled defenses, confusion, fear, and far worse are thrown at your enemies. Anything that manages to survive such a malicious onslaught are effortlessly cut down.

Race: Breton. The Bretons make capable hex blades given their impressive magic defenses. This gives them a handy advantage against enemy mages that warrior classes tend to lack.

Stone: Atronach. The Atronach stone is valuable for the +50 magicka as well as the 50% chance to negate all spell damage and absorb it. The spell *Discord has a perk that causes magicka to be replenished upon successfully hitting an enemy, so the -50% magicka regen becomes a non issue.

Stats: 1 Magicka, 1 Health, 0 Stamina. Stamina won?t be necessary for this build since enemies can be weakened to the point where even a light slash will cause heavy damage. Instead, we?re going to evenly distribute points between magicka and health.

Armor - Whatever you want. Go nuts. Since this is a modded build the choices as far as armor are virtually limitless. So I?m not going to list what armor to get. Instead I leave it up to you. Pick whatever you find aesthetically pleasing.

I am honestly quite surprised how rarely I see this weapon used in builds given how much potential it has. The nightingale blade bears a unique enchantment that drains 25 health and stamina from anything it strikes. One drawback with this weapon, however, is how quickly it can run out of soul charge. Be sure to pack plenty of soul gems. If the Nightingale Blade doesnt suit your looks, there are plenty of mods out there that allow you to disenchant unique weapons and armor.

Forgotten Magic Redone is a spell pack mod which adds 39 new spells to your game, each with 10 possible improvements to the spell, making 390 improvements in total. Spells gain experience as you use them, which allows you to unlock a new effect each time they level up. Up to 5 of these effects can be unlocked per spell. These improvements, as well as the spells themselves can be combined for potentially greater effects.

The 39 base spells are broken down into 10 categories. For the purposes of this build we?ll be focusing on 3 spells from the Mystic category as well as 1 spell from the Pyromancer category.. What follows is a brief description of the base spells in addition to a list of effects you must select for each spell as they level.

Cursed Rune: An apprentice Illusion spell found in the Mystic category. It places a rune which will deal a minor amount of direct magic damage, and afflict affected enemies with a variety of curses.

Curse of Susceptibility: weakness to magic for 30 sec.

Tanglefoot Curse: chance to slow movement by 50% for 30 sec.

Discord: An adept level illusion spell whose base effect is exactly like frenzy. But much like cursed rune, a variety of debilitating effects can be added.

Clumsiness: chance for each target to stumble over

Rage Eater: restores magicka to the caster if spell connects

Phantom Shroud: An adept illusion spell that shrouds the caster in an ethereal shroud. At its core, the shroud makes stealth more effective and grants the caster a small chance to evade physical attacks.

Vengeful Aura: chance of affecting attacker with fear when hit with magic

Dread Aura: chance of affecting attacker with fear when hit with physical attacks

Doppelganger: An illusion spell, found in the Pyromancer category, that summons a fiery shade in the shape of the affected enemy. This spell has a small chance of being casted automatically against enemies hit by cursed rune.

Cauterize: restores health equal to 2% of target's total each second for 10 sec. If the effect ends with caster below 50% health, restores an additional 10% health.

Devouring Flames: recover 5-10 magicka per sec. as long as the target attacks the doppelganger.

Phantom Pain: target takes 5-10 damage per sec. as long as it is not attacking the caster. 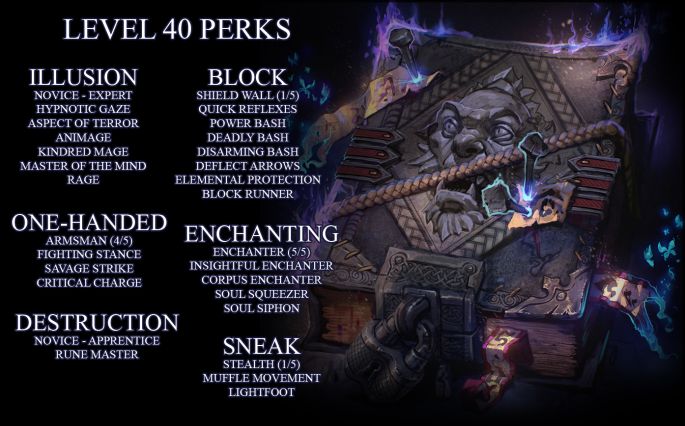 You will want to join the College of Winterhold as soon as you can. Although spells included within Forgotten Magic can be found anywhere, it?s much quicker to buy them from the college. Forgotten Magic spells use an experience point system that rewards experience towards mastering spells as you use them. If you?re the impatient type, the exp rate can be modified in the MCM menu. You?ll be almost entirely dependent on your sword until you invest some levels into those Forgotten Magic spells.

All of the spells utilized for this build fall under the Illusion category, so expect to master Illusion very quickly. Overall skill progression should come quite quickly as you?ll be using your major skills quite frequently. You may ask yourself, however, why include sneak perks in a warrior/mage build like this. The reason goes once again back to luck. The ability to wade through deadly traps without triggering anything is as much as useful perk as it is a great roleplay mechanic.

As you get further along you should join the thieves guild quest line to gain the best version of the Nightingale Blade. Prior to that you should enchant a blade with an absorb health enchantment. The glitched version of Drain vitality can be gained simply by learning Marked for Death, provided you have the Dawnguard DLC. 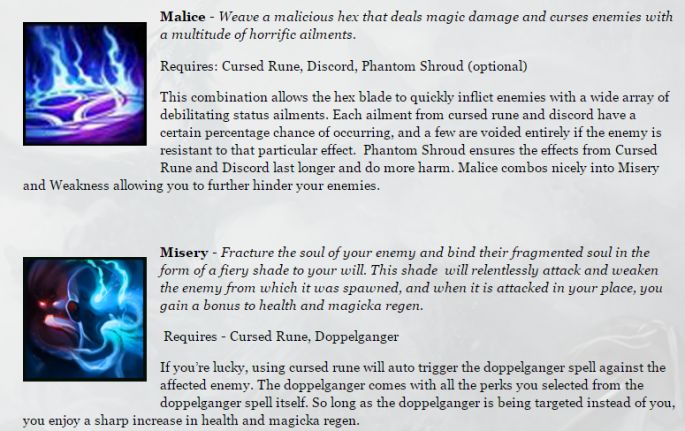 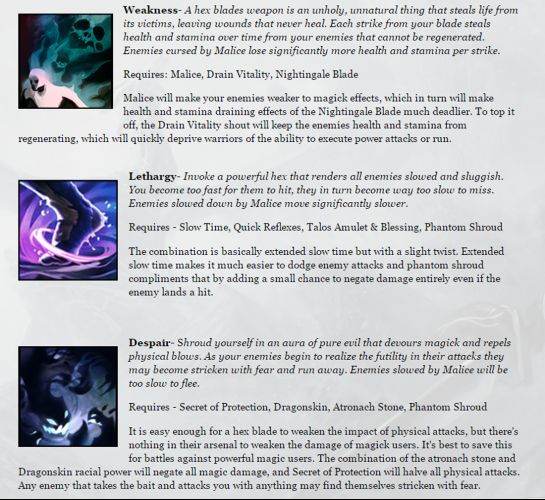 -
Tactics
Nearly every battle will begin by using Malice to weaken enemies, making their attacks less threatening and defenses easier to breach. Weakening enemies is absolutely imperative given your overall weak stats.

Keep in mind the spells within Malice are still just illusion spells, and as such their efficacy is based on the targets level. You can generally count on weaker enemies (level 30 -) to be afflicted with pretty much everything. Regardless of the enemy's level Malice will always successfully reduce physical and magic defenses, and potentially knock a target down.

Warriors and archers are relatively easy to deal with as they rely almost entirely on physical damage, which can be weakened. The combination of Malice and Weakness will quickly rob melee opponents of their stamina while guaranteeing you the stamina to execute your own. Stronger archers can be problematic if not dealt with quickly. Drain vitality can be used to disrupt them from afar while you close distance on them. Discord can be used to knock them down, or at the very least afflict them with frenzy.

Mages can be quite a handful because nothing you do will reduce their damage output, and even with an atronach stone and passive magick defense they can end you rather quickly. Thankfully you can still hinder them in so many other ways. Focus on using Malice to lower their defenses and potentially knock them down. Just like with archers, drain vitality can interrupt their attacks as well. If all else fails, Despair will negate their magic damage entirely and possibly afflict them with fear.

A Hex Blade will do well against a single opponent but can have difficulty with large spread out mobs of enemies. In these situations you?ll want to make use of Lethargy to slow everyone down thus making the task of dodging attacks much easier. Be sure to make use of Discord alongside this combination, because if you happen to knock someone down they will take significantly longer to get back up, leaving them defenseless.

Against dragons keep your distance. Even with the ailments from Malice applied, a dragon melee attack is pretty much fatal. Its best to stay back, focus on keeping the dragon weakened, and letting a mage follower do the heavy lifting.

If you?re going to bring along followers always take mages or archers. Melee followers will only end up getting caught within your abilities. Even marginally effective mages such as Serana benefit tremendously from your ability to weaken magick defense. If you decide instead to take an archer along, I recommend enchanting their bow with any magick effect that deals direct damage. Your abilities and their attacks will mean huge bonus damage for them.

Closing Statement
Thats it for the build. If you enjoy this build and wish to see it in greater detail you can find it on the Sky Forge, a new and emerging Skyrim/Fallout community where you can share and discuss character builds and more