By CurseNeverDying
on Jan 12, 2018
Hey guys, Havent shared a build here in a while so lets fix that. This build may be slightly more complex than most of my previous entries but I hope you all enjoy this one regardless. I've always wanted to give spider scrolls a try because I feel they are a widely underestimated weapon. To the arachnaphobes in the audience, I am sorry in advance. 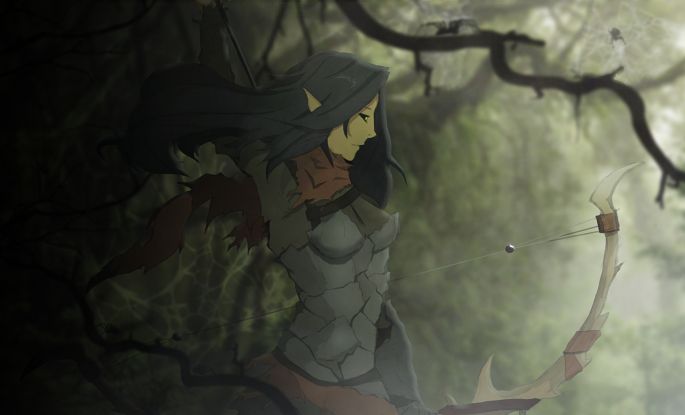 The Brotherhood is home to many fearsome and cunning killers, but none more so than the one known as the Wolf Spider, a cannibalistic huntress aptly named for her chosen hunting party - an endless swarm of man eating spiders.

The Wolf Spider is the perfect predator - silent, deadly, and ruthlessly efficient. She and her eight legged kin hunt in perfect harmony and know both the lands and their prey in deadly detail. But so little is known of her, for none have lived through the mistake of wandering into her many traps. Yet her calling cards are easy enough to find - Desiccated corpses left discarded across the dark reaches of Tamriel, often hung by strands of webs. A grim reminder of the terrible fate awaiting her next target.

Race: Wood Elf. What better race is there to play a cannibalistic hunter? Wood elves start with a nice bonus to sneak and archery, oh and they also have that whole cannibalism thing going.

Stone: Steed Stone. You will be hauling all manner of creepy crawlies, so all the extra carry weight you can get matters. The extra pockets perk in conjunction with the steed stone grant an extra 200 carry weight.

Stats: 1 magicka, 1 health, 1 stamina. Follow this distribution until both Health and stamina reach 200 points. Place everything from that point on into magicka. The Ring of Namira helps offset the low health levels and 200+ stamina is more than enough for what this build does

Aura whisper: This seldom used shout is invaluable for sensing enemies long before you make contact, allowing you to devise plans. And like a spider you have highly attuned senses.

Throw Voice: The ability to lure enemies exactly where you want them is invaluable to this build.
Spells & Scrolls:

You may have come across these in your adventures in Solstheim. But if you're like most players you've likely dismissed these strange, disgusting creatures as mere novelties. Follow this build and you'll find that these creatures are quite deadly despite commonly held beliefs.

At the core this build is a lone archer/summoner hybrid supplemented by large packs of deadly spiders. The wolf spider and her swarm work in tandem to keep enemies locked in disarray, disabled and confused. Various species of spiders, each with their own unique properties and use, provide her with a diverse array of tactics. 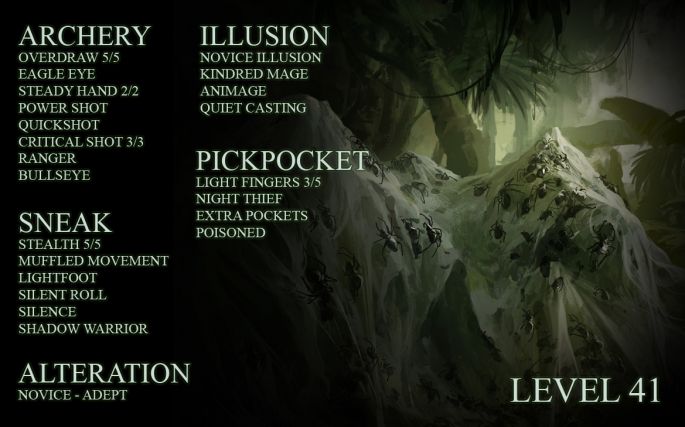 For this build I've steered away from crafting. In lieu of traditional crafting skills you will be ?crafting? spiders, which I will cover more in depth later on.

The build maxes out at a fairly manageable level of 40. Archery will be your main offensive skill and give how frequently it will be used it will max out quite quickly. Bulls eye is a game changer within that skill tree. Combined with a 1 second paralysis enchantment it grants you a large chance of paralyzing enemies.

Sneak will max out quickly but for the impatient types you may also utilize the Helgen exploit. Simply back stab Hadvar/Ralph repeatedly with a dagger as they crouch down in the caves. Deadly aim is intentionally avoided in this build, so the player cannot forgo the tactics described within in favor of plain boring sneak archery. Shadow warrior is a key perk that works wonderfully in tandem with the spiders. It's use in battle forces enemies to target your spiders rather than you. 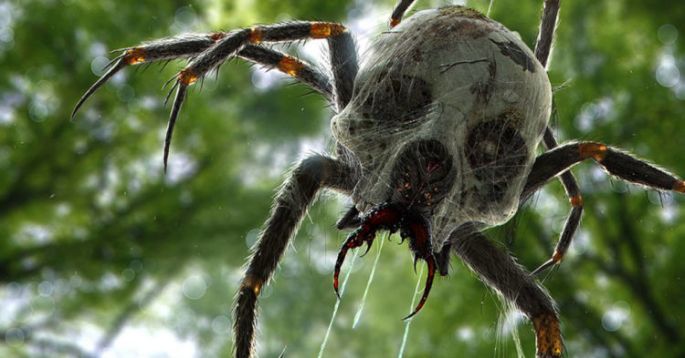 Spiders can be crafted in an Imbuing chamber found within White Ridge Barrow on Solsthiem. The albino spider pods you encounter on the island are combined with misc items like jewels to create spiders. Below you'll find the ingredients required to create the spiders used in this build.

Perhaps the number one reason spider are overlooked is how rare spider pods are once you've exhausted your initial supply from White Ridge Barrow. Fortunately there is a way around this by way of the duplication exploit. Fortunately the duplication glitch is quite easy to perform, and if you?re playing on any platform with access to console commands your life will be even easier.

-Get a secure location close to an entrance for a separate cell and a follower.

-Make your follower wait outside the entrance

-Drop the items you wish to duplicate one at a time.

-Have your follower pick up everything you drop

-As soon as everything is picked up leave enter the new cell.

-Walk back to the previous location and talk to your follower. They should have additional copies of
whatever you made them pick up.

If the explanation I gave you is proving difficult to understand, watch this video. It might help.

Those of us playing on the Remastered Version or on PC are lucky enough to have access to console commands. Which means we can completely skip the duplication glitch and just generate as much of these creepy crawlies as we want. Just open up the console and enter the following below. In this example ## represents the amount of the item you wish to spawn in your inventory. XX represents where the Dragonborn DLC falls within your load order on either Nexus Mod Manager or Mod Organizer.

The techniques you'll learn below are designed to keep your enemies crippled and confused. Your basic game-play will consist of keeping enemies focused on your spider minions, and shielding your spider minions wish ash shell to protect them and grant your invulnerable decoys. Paralyzing enemies buys your spider minions time to pile onto a single enemy causing heavy poison damage without fear of being killed off. Lastly a lone oil spider can act as a deadly explosive, obliterating anything in range.

As you can see this build has quite a few options at its disposal, but the majority of them require spider scrolls. So as you can likely guess this is a heavily resource driven build. Think tactically and use the best option possible in every scenario. It really helps to use Aura Whisper before hand to get a good tactical understanding of the present situation before committing to anything. 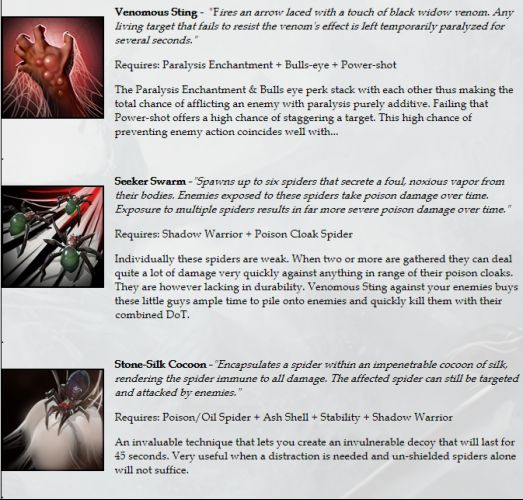 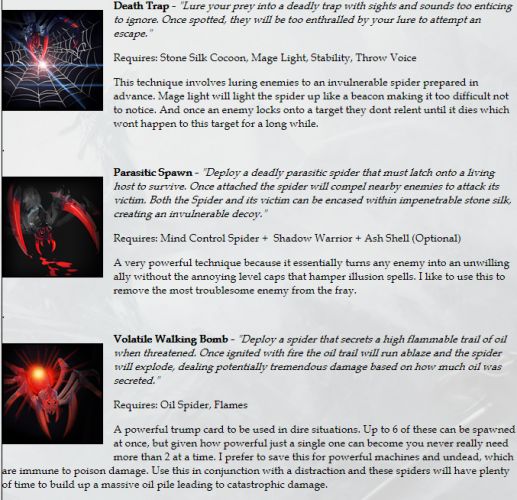 Venomous Sting should be used often in combat. Not only will it stall advancing enemies, it will also buy your poison cloak spiders ample time to swarm onto an enemy and stack their cloaks. Seeker Swarm allows you to confuse your enemy, forcing them to target a poison cloak spider rather than you whenever shadow warrior is used. Against 1-2 enemies the swarm in conjunction with venomous Sting can easily overwhelm enemies.

Parasitic Spawn will seize control of any living enemy regardless of level with the exception of enormous creatures like dragons as well as undead and mechanical enemies. This is best used against the toughest enemy you can sneak up on before a fight. Doing so will remove the strongest enemy from play, and if you manage to encase said enemy within ash, they become an invulnerable decoy.

Lastly Volatile Walking Bomb deals heavy indiscriminate damage so use with caution. Its best used against tough enemies who are immune or highly resistant to poison damage brought on by seeker swarm. Avoid using this against anything capable of fire based attacks. The oil spiders will explode on contact.
.
Recommended Quests & Roleplay

Roleplay with this build was simple yet quite enjoyable. You're a skilled assassin, hunter and tracker. One blessed with a peculiar talent for controlling spiders but cursed with an insatiable cannibal appetite. Perhaps this was Namira's doing - A blessing and a curse all wrapped into one. The ability to command a loyal horde but at the cost of gradually losing oneself to the unending hunger for human flesh, leaving nothing behind but predator's desire to hunt and feed. In this regard the Wolf Spider isn't entirely evil, at least no more evil than one would consider a sabre cat who preys upon an unsuspecting traveler.

A Taste of Death - You can't turn Skyrim into a morbid all you can eat buffet without first showing up to this dinner date. For your efforts in luring the unsuspecting priest to his demise you're awarded the Ring of Namira. Keep in mind getting caught in the act of cannibalizing someone will cause you to incur a bounty. So be smart and subtle about satiating your voracious appetite. Drag bodies away to more secluded spots if you have to.

The Dark Brotherhood - The life of an assassin meshes very well with that of a cannibal. Kill your assigned target, eat to your hearts content, and get paid to do it? What could be better? But money isn't your true motive. With the brotherhood you get to enjoy the hunt and the kill as well as the meal. Perhaps you're a picky cannibal killer who enjoys the thrill of a heavily guarded meal.

Thats all folks. Hope you enjoy the build.

And that's everything. I hope you enjoyed my newest character build. There will be plenty of more new builds to come.

And be sure to check out the build on TheSkyForge by following this link
https://theskyforge.ning.com/groups/tes-character-building/forum/character-build-the-wolf-spider