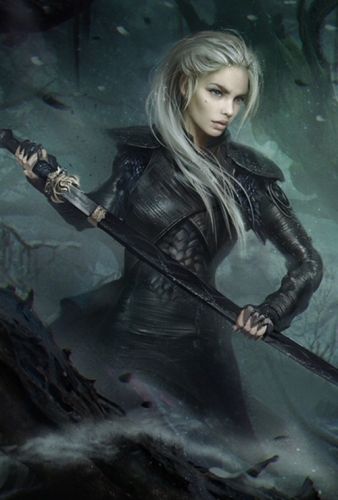 The Black Widow isn't a great hero or a grand villain. She is not a warrior or assassin. She is a common middle-age woman, who forced to became an avenger, gaining new unique powers and combat training, but without losing her morality in the proccess. She don't kill or steal without reason. And despite her dark appearance and sneaky style, she tries always to uphold the law and help the weak and innocent people of Skyrim, having no specific allegiance to any faction, lord or guild. She is a lone wolf, with a heart full of grief but also with kindness. The only thing she wants is personal revenge from the Dark Brotherhood. Finally, after getting her revenge, she tries to rebuild her life in a foreign land. Nothing more or less.

Mellisandre Jemane (now known as Mellisandre Black-Widow), used to live in a farm south of Chorrol, Weatherleh, with her husband Reynald and their son Albert. Her husband's family own this farm for many generations. And despite there is a legend in Chorrol, that Jemanes' patriarch, before 200 years, was a skilled and infamous thief, modern Jemanes are honest farmers and good merchants. Mellisandre's life was dull but good. Reynald and Albert were working in the farm or occasionaly hunting nearby. And Mellisandre was cooking for the family, tending the Weatherleah's forge from time to time, or collecting herbs, to brew simple healing potions and medicins. Once per month, she was making the trip to Chorrol, to sell some of the farm's products to town merchants. Although for some people in Chorrol County, she was known as smith, alchemist and merchant, she was nothing of the kind in fact, having only basic knowledge on these trades.

All these came to a tragic end, when a masked assassin killed her husband and her son in front of her own eyes and she barely managed to escape, running for her life, until she met an imperial legion patrol, near Hackdirt. From this incident, remained a scar on her face and a flame of hatred and lust for vengeance in her heart. From the investigation of Chorrol City Guard, she heard that the assassin who killed her family, was a member of the Dark Brotherhood. And that the only remaining hideout of this cursed bunch of cutthoats, is located somewhere in southern Skyrim. So, from this time, her path was clear...And Mellisandre's adventure has just began...


The elimination of Dark Brotherhood is Black Widow's first and only goal, from the first time she sets her foot on Skyrim. She doesn't care for anything else except from this. After fulfilling this purpose, she will take a path of redemption, to return to normal life. The Black Widow turns her eyes to godesses Mara and Dibella, to guide her steps for the rest of her days on Nirn. And this spiritual path, will lead her to find again love and partnership, and also a life of comfort and wealth. She is now known as one of the greatest alchemists and enchanters in Skyrim. And a succesfull businesswoman on the top of that. But when the need is calling, the Black Widow never forgets the path of shadow and blood, she had to walk before. To eliminate a brotherhood of assassins, she became a kind of assassin herself. And this, is something that she finds very useful in many situations, when barter or speechcraft are not enough... 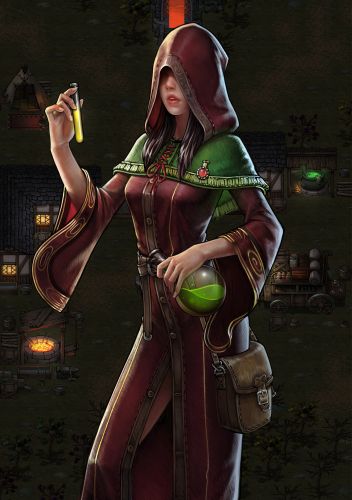 Race: Breton (Fine slim and elegant look for a female character. In addition, 25% resistance to magic and The Dragonskin power, are very useful, especially against dragons)

Standing Stone: Start with The Thief Stone until lvl 20-25, for a quicker advancement in Archery, Alchemy, Sneak and Speech, which are the crucial skills of this character. At low levels, you can also occasionally use The Warrior Stone, for advancement in One-Handed and Smithing. Then go for The Serpent Stone, which is monumental for The Black Widow archetype. A woman, who turned her grief to poison and her dark beauty intoxicates her foes.

Religion: Arkay, Mara and Dibella. She respects all the other Divines also and has a certain distaste, against Daedra and their worshipers.

Blessings: Arkay. The god of Life and Death, helps The Black Widow in her path of vengeance and redemption. And she always pray and meditate in one of his shrines once a week.

Shouts: Marked for Death. Another signature power of the Black Widow.

Attributes: Magicka 100-Health 500-Stamina 200. (Health is much more important than stamina for an unarmored character, without even magical means of defence. Stamina 200 on the other hand is more than enough for the very rare power attacks of the Black Widow. Also, for roleplaying reason, low stamina and carrying capacity, is more apropriate for a middle-age woman, even a skilled and trained one). 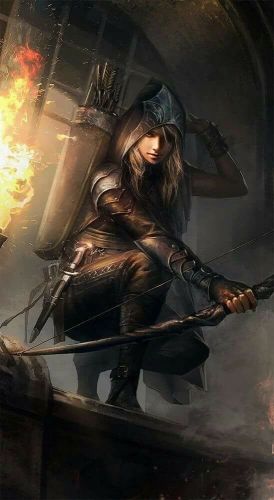 Quests:
1. Destroy the Dark Brotherhood. Black Widow's main purpose and lifeforce. Don't forget that.
2. The Book of Love. After taking her revenge, The Black Widow learns again, that love can be stronger than hatred. Sometimes, at least...
3. The Heart of Dibella. The knowledge that beauty and passion, can brighten even the darker souls, and give a new purpose in their life.
4. Marriage. Mellisandre, push The Black Widow aside for a while to seek love and pleasure again in her life. And eventually, she tries to build a new life in Skyrim. (The spouse and the city of her new life, is optional.)
5. Side Quests. The Black Widow never forgets, that there are many people, who need her help to overcome evil and pain in this world. And she is more than happy to oblige. Especially, in the city that has chose to live.
6. Main Quest. She don't feel like The Dragonborn. She is always The Black Widow and she always feels this way. But if she managed to eradicate an evil such as The Dark Brotherhood, she cannot stay indifferent to an even greater evil, that threatens to destroy the whole world, including the new life of hers and everything she loves. She cannot permit to lose everything again. She is not a helpless farmer anymore. And she will stop Alduin. One way or another.

(She is completely indifferent to the civil war or faction affairs, such as The Companions, or the Thieves' Guild. The Black Widow has her own personal agenda. She also stays away from any daedric quest for ethical and religious reasons.) 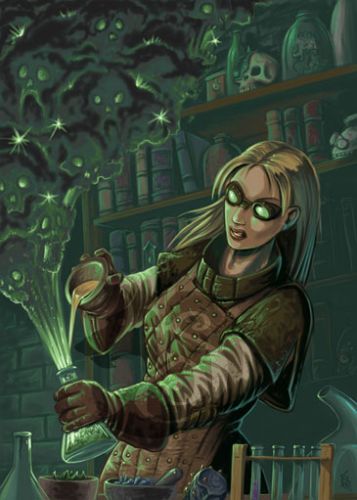 Head: Shrouded Hood. A useful trophy from the Dark Brotherhood, that optimizes her stealth abilities.
Neck: Talisman of Lust. A self-enchanted gold-ruby necklace, that resembles Black-Widow's ties with Dibella and her passion. Fortify Archery/Fortify Stamina Regeneration.
Hand: Shrouded Hand-Wraps. They make Black-Widow's backstabs completelly lethal. And ironically, they are another trophy from her most hated enemy.
Finger: Ring of Love. A self-enchanted simple golden ring, that resembles Black Widow's ties with Mara and her benevolence. Resist Magic/Resist Magic. (Utilizes both types of resist magic enchantments, that are available in game, turning the Black Widow invincible against magical attacks, in synergy with her Breton blood and the Agent of Mara effect).
Chest: Vest of Blood. Mourner's clothes, with a self-enchantment, that makes The Black Widow to remember her loss and her oath for vengeance. Fortify Health/Fortify Health Regeneration.
Feet: None. The Black Widow walks, runs or sneaks around, always barefooted. It helps with both the roleplaying of a humble widow and to minimize the noise while sneaking.
Bow: Bow of Retribution. A sel-enchanted simple hunting bow. An extension of Black Widow's punishing and avenging character. Shock Damage+Damage Magicka/Fiery Soul-Trap.
Dagger: Blade of Woe. Another trophy from the Dark Brotherhood. Perhaps the best dagger in game. 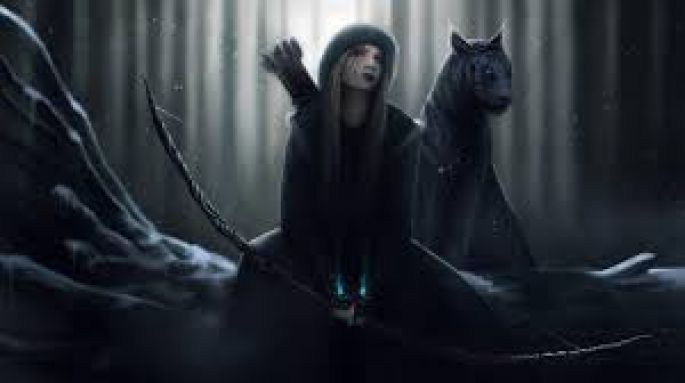 The Black-Widow excels inside a dark dungeon, where her stealth abilities are unmatched. There she has the option to sneak attack her foes, either from distance with her bow or up close and personal with her dagger. The use of poison is helpful in low levels, but in higher levels there is no need for that. Battles on the open field and in the light of the day, are far more challenging for her, even in higher levels. There she has to be more tactical and the use of her poisons is a necessity. A combo of the Marked for Death shout and The Serpent's paralyzing power is also helpful. A good tactic, is to strike first from a distance (optimal a sneak attack if it is possible), with the use of a weakness to poison+damage health poison. Then she can continue to strike with arrows, using simple damage health poisons, or a paralysis+lingering damage health poison, for more dangerous foes, such as giants or mammoths. Finally she can finish her foe with a dagger, if he managed to came close enough to her. The best is to avoid a long close combat, because of her complete lack of armor. The Blade of Woe, with its absorb health enchantment, perhaps can help her to survive for a while but not much. The same tactic is recommended against dragons, with the exceptions that they are immune to paralysis poisons or effects. Against multiple opponents, perhaps the best tactic is to sneak past them, using an invisibillity potion, if a battle is not necessary. Otherwise, the optimal is to try to hit them from distance and unseen, as long as she can. And if someone approach her, to instantly paralyze him, either with the Serpent's Stone power, or with a poison.

Giantbane; Arrow with Paralysis+Lingering Damage Health poison repeated as many times is needed.