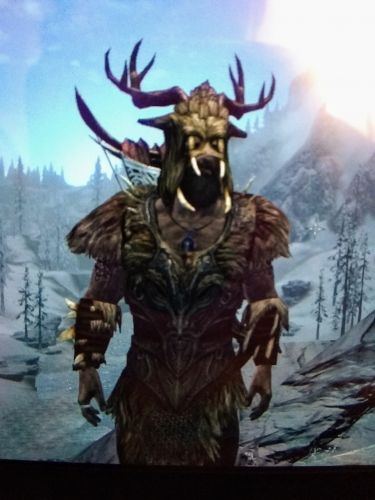 Hircine's Huntsman was born to hunt and to serve the Daedric Lord Hircine. He readily accepts Hircine's Blessing and gifts and hunts down his enemies quickly and silently. While not the strongest build, it's a good way to play through the Companions questline, especially for a non Heavy Armor character, as the Companions' Wolf Armor is better suited for a one or two handed warrior. 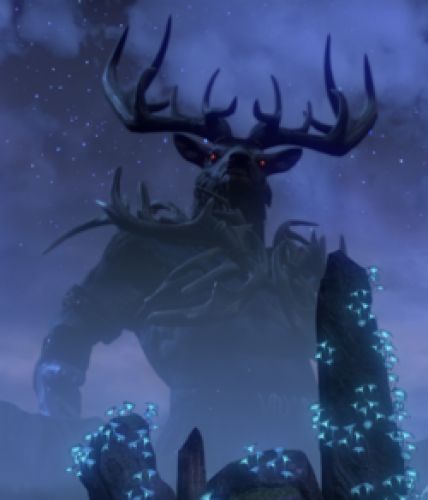 This build is all about looking like an agent of Hircine (above). To accomplish this, I selected Forsworn Armor for its reliance on animal hides and furs, especially the headdress, which copies Hircine's own dear-head look. Unfortunately, Forsworn Armor is not particularly good, as it has low defensive stats. The Armor of the Old Gods, which is a slightly improved, enchanted version of Forsworn Armor, helps to mitigate that low defense. Additionally, the Gauntlets and Boots sport an archery and sneak enchantment respectively, which is a great aid in the sneaky archer build. Ultimately, the Armor of the Old Gods doesn't offer much more protection than regular Forsworn Armor, and it will quickly be outstripped once you start finding Elven armor and above, but again, the value isn't in its defensive stats, its in the armor's look and aesthetic. The Armor of the Old Gods can be obtained when siding with Madanach at the conclusion of "No One Escapes Cidna Mine" in Markarth.

The primary weapon of this build is the Glass Bow of the Stag Prince, which, just like the Armor of the Old Gods, isn't the most damaging bow, but fits the build perfectly. This bow does require the Dragonborn DLC, and is thought to be a reference to Hircine himself, the "Stag Prince." To obtain the bow, you must travel to Solstheim and the Ramshackle Trading Post in the center north of the island and speak to Falas Selvayn, between the hours of midnight and 6 am. Initially, he will actually have the bow equipped, and it will be impossible to obtain it. If you reverse pickpocket even an iron dagger onto him, and then fast travel to Skyrim, back to Solstheim, and then back to the Trading Post once more, he will have the dagger equipped and will sell the bow normally. It will cost around 1000 Septims, depending on your Speech level. The Elder Scrolls wikis give a few other similar methods for obtaining the bow, but I found this one to work perfectly and simply. At the beginning of the game, the bow's base damage of 16 is quite high, but in the later game it will be quickly outstripped. The bow also has a very unique enchantment that justifies its continued use into the mid game. The bow will initially add 5 points to health and stamina when equipped and will add 5 more points with every 20 animals killed with the bow, up to a max of 25 extra points to health and stamina after 80 animals killed. And animals include everything from skeevers and mudcrabs to deer, bears, and sabrecats, even to mammoths and trolls, so I was able to achieve the cap quite rapidly, especially when hunting in the plains west of Whiterun. This enchantment is simply perfect for Hircine's Huntsman.

And a few last details:

The Ring of Hircine is a must for any Werewolf character, which allows additional transformations each day when it's worn. You can obtain it at the conclusion of the "Ill Met by Moonlight" quest, which is actually Hircine's Daedric quest, by siding with Sinding and slaying the other hunters. You can also obtain the other reward, the Savior's Hide, by going back and killing Sinding after you have the Ring of Hircine. Savior's Hide is a unique light armor cuirass that gives a 15% resistance to magic and 50% resistance to poison. It also compliments the Forsworn Armor very well, and SPOILER!!! was actually torn from the body of a werewolf, further adding to the Huntsman aesthetic.

I found Kynareth to be the most logical Aedra to serve as a compliment to the Daedra Hircine, as Kynareth or Kyne is often associated with nature (though more accurately the protection of nature, rather than the hunting of it). Hircine's Huntsman would likely have no issue with the perversion of Kynareth's original purpose. As such, the Amulet of Kynareth, which increases stamina by 10 points, worked really well from a roleplaying standpoint. Additionally, Kyne's Token, which has the appearance of an Ancient Nord Amulet, is an even better necklace to have, not only because it relates to Kynareth, but also because its enchantment reduces animal damage by 10% and increases bow damage by 5%, but ALSO because it is obtained from a quest called "Kyne's Sacred Trials" which tasks you with hunting several "Guardian Beasts" around Skyrim. It can be started by speaking to Froki Whetted-Blade at Froki's Shack southwest of Iverstead in the mountains. The absolutely perfect accessory for Hircine's Huntsman.

I found the Poacher's Axe on a bandit at Halted Stream Camp west of Whiterun, and as I had been using a regular axe to chop wood for crafting arrows anyway, I decided that this was another perfect addition. The Poacher's Axe is the exact same as a regular axe, but it has an enchantment for 3 damage on animals. Completely negligible, but it goes along with the build quite nicely.

You will also want to raise your Smithing skill to 60 in order to gain the Arcane Blacksmith perk, which will allow you to temper each of the enchanted items this build suggests, adding to their effectiveness and keeping them from becoming completely useless later in the game.

I used the Thief Stone to help raise my Sneak and Archery abilities faster, though both the Lady and Lord Stones could offset the low defensive stats of the Armor of the Old Gods by regenerating health and stamina faster and adding better armor and magic resistance respectively.

A good huntsman is good with the bow, and seeks out others who share that skill. Angi at Angi's Camp south of Falkreath presents several archery challenges that reward up to 6 levels of Archery experience. Additionally, I would recommend Faendal as a companion, as he is an accomplished hunter, as well as Aela the Huntress, who not only shares Hircine's Hunstman's skill with the bow, but also his beast blood.

You will want to do the full Companions questline, as well as the "Totems of Hircine" quests that follow. These will give you additional powers in werewolf form that function like shouts, from a life aura which shows you were enemies are in the world, to a powerful fear enchantment, to being able to call two wolves, ice wolves, or werewolves into battle with you as you level the power up. I also often like to do both the Civil War and Dark Brotherhood questlines as a werewolf, especially when roleplaying as a particularly savage werewolf. For Hircine's Huntsman, he will be all too happy to hunt opponents on either side of the Civil War, and will thrill in being paid to slaughter individuals for the Dark Brotherhood as a werewolf.

That's it! I enjoyed crafting and playing this build immensely, and I enjoyed posting it here, as my very first one. And remember, you can always check on the facts and figures of each of the items featured here by consulting the Elder Scrolls wikis at uesp.net or elderscrolls.fandom.com. I welcome any comments or suggestions!